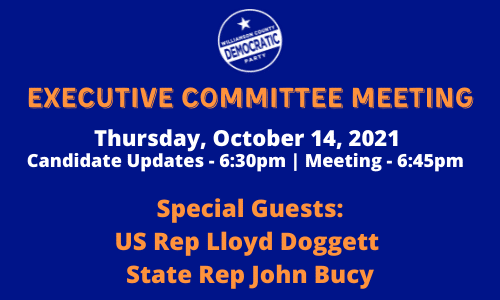 The WCDP Executive Committee gathered virtually on October 14, 2021. Our Executive Committee meetings occur on the second Thursday of every month to vote on party business, hear from elected officials, candidates, and guest speakers, and join in fellowship with one another. Thank you and welcome to the first-time attendees who joined us from all over the county! Join our mailing list for reminders by clicking here.

This month, we were excited to hear from US Representative Lloyd Doggett and State Representative John Bucy about redistricting and the impact the hard work happening in WilCo has on supporting our Democratic values.

US Rep. Lloyd Doggett discussed redistricting, noting how the good work of the WCDP has changed the whole complexion of the county and said the redistricting efforts this year are similar to what has happened before in Travis County. Texas GOP, to protect as many of their incumbents as they can, has re-drawn districts to split up neighborhoods, ignore Hispanic and African American communities, and “pack” districts to move as many Democratic voters as possible into a few specific districts, thus strengthening their Republican holds on the others.

“I know you’ve had an uphill climb but you have climbed and had amazing success and will continue to have county-wide wins.” – US Representative Lloyd Doggett

Thank you to Rep. John Bucy for joining us (despite a long day of fighting for our rights at the Capitol) to talk about the eight propositions that will be on our November ballots. We’re thrilled to hear he’s running for re-election in 2022 and we’d like to send a huge congratulations to the Bucy family on the birth of their new daughter, Parker! To hear more about Rep. Bucy’s recommendations on the propositions, please email sara.groff@house.texas.gov

WCDP Chair Kim Gilby addressed the Executive Committee, saying “Recently the Texas GOP has taken Williamson County and carved it up like a Thanksgiving turkey. We stand firmly behind our incumbents and candidates and are as committed as ever to electing and re-electing Democrats up and down the ballot, every cycle. Clearly, the GOP has taken note of the hard work we are doing in WilCo and is resorting to their dirty tactics to gerrymander districts in their favor. These maps are drawn for a reason to keep us from being competitive, but as Rep. Bucy said, WilCo has seen challenge before and has always risen to meet it.”

Make your plan now to vote early in the November election! During the meeting, a motion was passed to stand against Proposition A in the city of Austin and Chere Heintzmann was endorsed for Georgetown City Council District 6.

As Chair Gilby noted, Democrats in Williamson County are as fired up as ever and ready to fight for our rights by supporting our elected officials and candidates. Thank you to all who attended, and please join us on November 11th for our next meeting.